I have 2 or three other blog posts I have been working on, and planned on posting one this weekend until about 6p.m. last night. Usually my blog posts come with a warning or prologue to give you a heads up on what follows. I do this because I never intended to start a blog and when I did I vowed to make sure not to pigeon0hole my topics into one subject matter and become stale. Sure, the blog my become stale anyways do to the same guy writing everything, but at least I tried. Right?

Here is your warning for today: This blog  post was completely unplanned, unedited, it rambles on and like most stories I tell people It doesn’t really have a point…OK are we ready?

Last night, I was checking twitter while in the bathroom, and my eye triple-checked what I was reading. Shocked and doubtful I asked myself if it was April fool’s day, but, alas, that was over a week ago.

Sadly, I learned Manny Ramirez had retired from baseball rather than face another suspension for a failed drug test. Now I understand a grown man should not be so involved in sports to the point it can effect his mood, but we all know I am not a grown man.

Growing up in Buffalo baseball was not high on my priorities. Football, soccer, and hockey were the sports I grew up watching and playing, but when my family relocated to Cleveland in the early 90’s it was the perfect time to catch Indians Fever. In 1994 we had a new ballpark and a young exciting team.

These guys were awesome! These guys were fun to watch, and so easy to root for. I spent the 90’s and early 2000’s learning the game of baseball one home run at a time. I delivered Pizza’s late while glued to the radio unwilling to leave my car and miss a pitch or two.

I had my heart broken in ’95 when the miracle group of young misfits took us to the series. I marveled with a roomful of friends as Tony Pena outsmarted hitters and base-runners to help us advance. In1996 I was at the ballpark as the Tribe gave up a game winning, season ending home run to Roberto Alomar and The Orioles.  I served David Justice a hamburger when I worked at Wendy’s and welcomed him to town although just 2 years earlier he had been public enemy number one on the Atlanta Braves team. Mike Hargrove, the manager of the team, moved to my hometown and I attended school with his daughter. At the 1996 graduation I was in student council, so I lead the Hargrove family to their seats at the ceremony. In 1997 the most magical year I will ever experience around the game of baseball I literally lived and died with every pitch all the way through the debacle of game seven. I watched the end of the game on a small 13 inch tv at the pizza shop I worked at with my good buddy Eric Saule. We walked around in a daze for days after that game, disbelief at what we had seen.

Shortly after that season the Tribe began to lose it’s young core who were now seasoned veterans to trades, injuries, and free agency. A new group was brought in with some stellar players, but looking back it was not the same nor can it ever be.

My favorite player at the time was Manny Ramirez. The guy was so powerful and played the game lightly enough that you knew the stress of a big time at bat against a big time pitcher meant nothing. You knew with one swing of his bat the game could be saved, and the city had a chance to win. Manny Ramirez is a big reason why I fell in love with baseball. He is a part of the reason my first novel was built around the game of baseball.

As of 603pm yesterday I can never look back at those times the same way again. The cloud of drug use over the game of baseball has tainted everything I thought I knew. Call it overly dramatic if you want, but it is true. I understand a lot of the arguments that there has always been cheating in baseball. Players do anything and everything to gain an advantage. Albert allegedly corked his bat, teams steal signals, and for some reason that stuff is just fine. In fact when Albert’s bat went missing before they could suspend him I thought it was hilarious.

Also, I understand baseball purists hated the steroid era for pumping up numbers and making baseball more about the big hits than the fundamentals the game was built on. Solid defense, steals, and bunts should be enough to win games, they say.  While I agree watching the Indians win on a suicide squeeze the other night was outstanding, seeing Manny Ramirez crush a three run homer to the upper decks was mind blowingly awesome.

In 2011 there are just a few remaining players from those young teams, and though Manny hasn’t been a member of the Indians since 2000 I always watched and rooted for him (though I never rooted for the Red Sox). Jim Thome is a part time DH still slugging homers, Omar is a back up third baseman for the White Sox, but the likes of Albert, Lofton, Sorrento, Alomar, and the others are long gone.

What does this all mean? Well, at the beginning of the post I told you I had no end goal or point I just needed to vent in my selfish, child of the 80’s way that my magical sports childhood was like a ride at Disney…a thrill, but in the end all it boiled down to was a bunch of smoke and mirrors.

I look forward to taking my son to a baseball game in the near future, and now that my parents have moved back into the area my dad and brother can join us, but no matter how much I love the game with Manny gone, at least for me, it will never be the same. 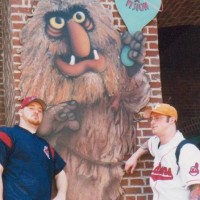 1 Response to Why Manny, Why?