a few days after the last show…or is it?

yeah, i am one of the many.

One of the many with my iphone, in hand, refreshing every few minutes to see if there is any news about fnm. None of my friends or family would be surprised to know how invested i am in the band and their status as I have been a fan for over 20 years. I was as shocked as anyone in 2009 when I heard faith no more had plans to get back together for some shows. This was the group that functioned best when they were openly antagonizing each other in the press while also ripping on other bands, mtv, labels, radio, and whoever else got in their way.

On July 3rd 2010, I was able to drive my pregnant wife about 9 hours from Cleveland, Ohio to to Philly, Pa to see the band i had talked to her so much about. To know that one of the first things my son ever heard was a faith no more concert makes me very happy.

There we were, third row, right in front of keyboardist Roddy Bottum, and the band was amazing. I won’t bother to do a song by song review, but I will say that when they played Chinese Arithmetic i checked off a previously impossible event from my bucketlist. (ironically the next thing on that list was for you to read one of my blogposts, so now that’s crossed off to heh)

Faith No More has been very quiet on their plans for the future through the whole reunion, so when I left I realized that was probably the last time I would see them live. Previously, i had seen them may 20th 1995 in Cleveland, Sept 6th 1997 in Chicago, Sept. 10th in Columbus, Sept 11th 1997 in Cincinnati, and Sept. 23rd in Cleveland, but please don’t ask me which was my favorite because we’ll be here all day.

Now, once again, Faith No More has no future dates or plans announced and the fans are left wondering if this is it…again. They have been playing with a funeral stage set-up and have been playing a new song with lyrics that sound to be about rebirth, so as usual the band themselves is making a joke of pulling at our heartstrings…and i love it.

Meanwhile, all the guys have other projects going and even chuck mosley their previous singer is eying a comeback after living through another series of unfortunate events, and all I have is this beautiful art from a concert poster I bought which promoted the very show in Philly that I was able to witness firsthand: 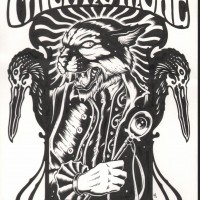 yeah, please don’t be too jealous, but this is hanging on my wall right now staring at me.

if this is indeed the end of the band (no reason it should be) i want to thank them for some amazing music and memories, but further i want to thank them for the reunion. I know for years they balked at rehashing the old material, so to have them find a passion for these songs again enough to play dozens of shows around the world, made it special for me and, i imagine, the other fans as well.

if this is not the end…and a new album, ep, single, live disc, or tv special recorded in my backyard are on the way, remember: Cleveland, Ohio is a great place to play

1 Response to a few days after the last show…or is it?