rules of life i have yet to learn #2

#2: dennis leary’s, ‘no cure for cancer’ comedy cd can not teach you life lessons.

I can’t remember my dad ever saying this rule word for word, but I’m pretty sure this rule is universally accepted as high law. Yet, here we are reading a blog post which started with a dennis leary quote in my head.

Life teaches you to live, “moment to moment, street to street, and beat to beat.”

As I have grown older and started a family I see more and more what he meant.  When the Cleveland winter finally gives way to spring I find myself enjoying the flowers and ambiance just a little more than I used to. When I have a rare weekend day with no plans I appreciate the luxury of watching my son curiously explore his surroundings. Life is precious and needs to be made as special as it can be.

So, last weekend, when I dragged my old, fat, balding self out to see a metal band called, “Knives Out” at Peabody’s I was so disappointed in what I saw from the rest of the crowd. As one of the older patrons of the concert club that night, I saw that a majority of the other concert-goers had their iPhones out and were either taping the show, taking photos, or texting away while the band gave their all onstage.

The band, ‘Knives Out’ play a fast, thrashy metal that seems perfect for creating a chaotic mosh pit, and yet a lot of the crowd stood their ground. Worse yet, they weren’t even watching the actual show. They were watching it on their phone’s screen as they recorded it. One female fan stood next to me almost the whole set without once enjoying herself because she was so worried she’d miss something on the screen.

The intensity of the music mixed with a few tall boys fueled my anger and disappointment in my fellow concert-goers. Not that I expected everyone to be jumping around and punching each other in the face, but have the decency to watch the show while you’re at it. There is enough time in our lives for reflection and work and idle-b.s.. When you’re at a concert, it’s the perfect time to let go of all the stress, sadness, and pain of everyday life. Soak it up whenever you can because these moments are too far and few in between to waste them on your phone.

As I noticed more and more people tuning out of the moment and worrying about things other than the band I started to think about Dennis Leary and what he taught me about living life. I realized he was so right, and I felt right then and there it was my duty to point out this travesty, so I started the initial ideas for this blog post. I wanted to make sure my motivations were clear and that my message was clear. I picked out one particular youngster, who stood about five feet away, and pretended I tapped him on the shoulder, took him outside and laid my case before him. That, I decided, would make for the most compelling blog-post.

His dreads were dyed, so I would start my conversation with a compliment about his hair coloring. Then he would know I was a hip dude who just wanted to help and not some wacko. He would nod and light a cigarette while I declined the one he offered me. His local hardcore band t-shirt was older than he was which gave me another thing to mention.

His sideways glance toward the stage clued me in that he was unsure why he had to be missing his favorite band playing, but his desirous glance toward his phone reminded me just how important it was that I explain to him to live life, “moment to moment, street to street, beat to beat.”

Quickly, I begin to lay out my thoughts for him about life and concerts and making sure each moment is special. At first, the young kid seems to pass off all my words as more crazy old man rantings, but as I continue to plead my case, using memorable anecdotes from my storied life, I can tell he is coming around. I know when he puts his phone back in his pocket that I am making a difference, one kid at a time.

“Hey, Doug.” My friend Craig Sauerwine taps me on the shoulder and says loud enough to hear over the music.

His words bring me out of my daydream and I see the band has moved onto their next song.

“What did you think of that tune?” Craig asks then continues, “I still prefer Dog Fashion Disco, but Todd’s vocals are a perfect fit for this project.”

I look over to where the young dreaded teen had stood, but realize I had concocted him as a part of my day-dream-blog-post. The crowd are still watching their phones. 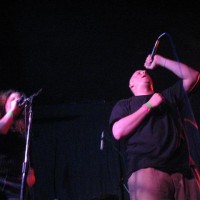