Yesterday I spoke with Marc Rizzo about his upcoming solo tour as well as his work with Soulfly, The Return To Roots tour, and Dead By Wednsday:

Douglas: Marc, We did some dates together last summer when you went on the road with Dead By Wednesday for their acoustic tour and I was with Chuck Mosley. How different/weird was that for you to play the stripped down versions of songs in very intimate settings?

Marc Rizzo: Yeah, it was a fun tour playing with those guys and you guys. I play a lot of acoustic guitar. My solo records have a lot of acoustic on them. I had been wanting to do something with a more rock-oriented singer, like Rob (Rob Roy of Dead By Wednesday) so it was the perfect opportunity, man. I had a lot of fun, and I hope to do even more with those guys.

Douglas: You did a song, ‘The Surgeon’ on their last album. How did that track come about and how do you like the final product?

Marc Rizzo: It was a song they had written already. I just came in and added some ideas on guitar. I think it came out great and I’m hoping to do more with Dead By Wednesday.

Douglas: You’ve been on the road as part of the Return To Roots tour with the Cavalera brothers this passed year. How awesome has that tour been?

Marc Rizzo: It’s been incredible. We just finished a world tour. We did dates in the US, Canada, went over to Europe and Russia, and then down to South America and Mexico. The shows have been great, you know, sold out, and the fans are really excited to hear this record played in its entirety. It took a lot of hard work for us to play just like the record, so it’s awesome to be doing it.

Douglas: I read that there may be more dates added. Any news on that front?

Marc Rizzo: We leave again in February to hit even more American markets.

Douglas: I was on the road in the UK during October when you guys hit Cleveland, and I thought about swimming home just to see that show. What are your favorite songs from that album to play live?

Marc Rizzo: Probably, ‘Dusted.’ Has such a cool groove to it. And, ‘Cut Throat.’ It was great to play the second half of the album.

Douglas: And this month you’re doing a solo tour, which hits Cleveland January 10th. What can fans expect to hear at those shows?

Marc Rizzo: Instrumental guitar music, you know, shred metal, but there’s also bluesy, jazz inspired songs and acoustic flamenco guitar driven songs. I’m very influenced by Joe Satriani, so it goes along those lines but heavier. Soulfly fans can really get into the heavy stuff and then there’s the instrumental side as well. it’s a lot of fun to tour this project. I have three solo records out, The first two were on Shrapnel (Records) and the third I put out myself. I’m talking with a new label about releasing my next one.

Douglas: Cool. So, your song, ‘Synapse’ is calm and relaxing, almost hypnotic, ‘Wrath of Crom’ is face-melting, shredding riffs, and then, ‘Pinata Hits Back’ has that flamenco style you mentioned earlier. What’s your favorite style to play?

Marc Rizzo: I love it all. I love guitar music. I love to play guitar. I’m really torn between it all, which you’ll see at my solo gigs. I switch between styles. I play Soulfly stuff. I play acoustic stuff. I mix in some covers. I just love everything.

Douglas: Having seen you really, really up close live, last summer, I can say that your fingers are a blur when you play. When did you first realize you were developing your astounding ability to play so fast and what advice would you give to beginner guitar players who want to shred like you?

Marc Rizzo: Thank you. The first four or five years after I started to play I got into more shred players, like Yngwie (Malmsteen), and I always wanted to play like that. Obviously it takes a longtime. You’ve got to learn your scales, learn theory, and try to practice with a drummer or a metronome. It’s so important to play in time, not just fast. You need to play fast and clean.

Douglas: Where’s the best place for people to hear your music?

Douglas: After the solo tour and the additional February dates of the Return To Roots tour, what’s next?

Marc Rizzo: Like I said earlier, I’m talking to a new label about releasing my next solo record. And I’m sure we’ll start another Soulfly record and continue to tour with them.

Marc Rizzo plays at the Cleveland Agora on January 10th.

Hope to see you all there. 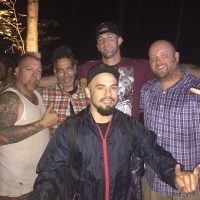