Douglas Esper: How did you get your start in romance/erotica?

Zack Halford: Is it too cheesy to say I didn’t choose the genre it chose me? I don’t know. I have story ideas just like any other author. Mine gravitate toward characters in power struggles, and sex or the manipulation that comes with sex or simply sexuality often plays out to resolve the conflict. Is it a reflection on my own psyche? Is it proof I was dropped on my head too often as a child? I explore topics that are hidden, buried, too taboo to discuss in the mainstream and this is my way of saying, hey, how do we truly feel about how we use sex as a weapon or a gift or a cop out or just a great way to spend fifteen minutes of our time on a Sunday morning.

DE: Do you ever get embarrassed?

ZH: Constantly. I’ve been conditioned since day one to view all of this stuff as subversive, greedy, villainous. We make sex a guilt. I feel it just like anyone else, but the story is there and it needs to be told. Obviously, there’s a market for it or I wouldn’t have three stories due out over the next couple of months. Will I ever be numb to it. I doubt it, because I read the other stories in the anthologies I appear in and my cheeks burn red with embarrassment and curiosity and then embarrassment about my curiosity when I see how the other authors view sex and power and all the baggage that comes along with it.

DE: The Romance/Erotica genre is dominated by female authors. Have you found it difficult to make a name for yourself?

ZH: Men and women perceive sex differently. Everyone knows that. What’s the old saying, “Women use sex to get love and men use love to get sex.” Or something like that. So when I write my story from a male perspective I’m describing what a male desires while focusing on what would entice a woman to keep reading. All while following a logical plot. Men crave the visual, right? Easy enough, but if all I talk about are curves peeking from beneath lingerie, I lose my audience. Women want to know the how and the why. How did she decide to sleep with this man? Why is she letting him tie her up, or pull her hair, or wear that costume? And after all that I need to show the fallout. I think if I can balance these elements, I’ve created a story worth reading. If someone that typically would be too shy to explore themselves, relates to something I write, then it’s all the better.

DE: Your story, Another Last Glance which appears in the upcoming anthology, Fourteen Shades of F*cked Up has elements of sci-fi and suspense intertwined with the steamy parts and poses some serious questions along the way about the importance of life, respect, and how our society treats its elderly and sick population. Where did the inspiration for this story come from? 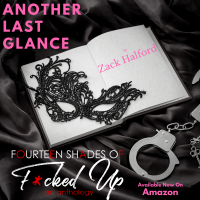 ZH: A dark place. A lonely place. With that story I faced my fears of growing older and less vibrant…less desirable…Maybe I wasn’t put on this earth to be the next great American author or actress or politician or doctor. Maybe I’m just…ordinary. Maybe when I die, no one will care about the sacrifices I made to write my stories. Maybe when I die, I’m just gone. So, I tried to give my MC, who faces the same fears, one last party to cap off an extraordinary life.

DE: Any advice for beginner writers?

ZH: Doesn’t everyone kind of say the same things for this?

DE: Well, you’re older brother has found success as a rock critic and then as a journalist for several of the biggest magazines published today. Did that open any doors for you? Did he teach you anything that might help?

ZH: I never see my name listed anywhere as an author…I’m always indie Author or romance author. I don’t have any NYTimes best sellers. I don’t support myself through my stories alone. I grind and grind, just like everyone else. Read a lot. Write a lot. Make a lot of mistakes, and then do what I don’t, which is to learn from those mistakes. Find your voice. Find your niche. And then when you get comfortable, take a sharp left. Turn down an alley you’ve never noticed before. Get lost and write your way out of it.

If it helps, throw in a sex scene or two. Put a woman with self esteem issues on the corner of a busy yet boring intersection. Get a thread of her dress stuck in a cab door and then have the car drive away fast enough to make the dull city scene suddenly something to tell people around the water cooler. Then have a self-conscious nerd nearby with a spare shirt and the afternoon free to get her out of the spotlight.

DE: Ha! Every nerds dream come true. Okay, there’s a story prompt from Zack, feel free to post links to what you write in the comments.

ZH: Make sure to send them to me as well. I mean. I don’t know. You had me read a story of yours to give you guidance on steering the story a certain way. What did I tell you to do?

DE: You told me not to steer. Follow the story.

ZH: No, follow the characters. Let them show you the story. Sometimes stories are dangerous, exciting, funny, or sometimes they’re boring, but everyone has stories. And they all want theirs to be told. You had an ending in mind but couldn’t get your characters where you needed them. What did you do in the end?

DE: The story went off the rails and took on a life of its own.

DE: What else have you released recently?

ZH: A story called Valentine’s Day Sacrifice in an anthology called, Cupid’s Arrow. It’s a continuation of a story arc that follows an unlikely couple running from the mob, the government, and their own pasts. I have a whole series of stories that find these two at the center of…maybe not as steamy as previous work. This is more crime romance. All of my stories connect in some way, and these two are sort of at the center of all the other stories. I’m excited to see where they take me.

DE: What’s the best way for readers to stay up to date on what you’re doing?

ZH: I haven’t embraced twitter, but I troll facebook. My page is facebook.com/zackhalfordromance. For authors, there is a group called fiction Writing that I’ve joined recently. There is a massive amount of people creating really good stuff and they release anthologies as a group, which I think is awesome.

There are release events for Fourteen Shades coming up on February 14th and 15th.

You can find my author page on Amazon. It would make my day if you stepped out of your comfort zone and gave my writing a chance. Yes, it’s dark fiction…it’s romance…it’s erotica, maybe…but it’s not smut…there’s merit in our dark recesses as well as the light. 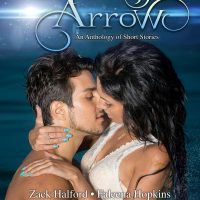 read the site it's all there!
View all posts by douglasesper →
This entry was posted in artists i like, book reviews. Bookmark the permalink.