History has proven that when you go see a band that hasn’t toured in several years there is often a good reason why. The risk you take in marring old cherished memories by experiencing new underwhelming ones can be daunting enough, but when the bill features two bands that you haven’t seen in over ten years, it can be downright scary.

When I first heard about the double bill of Dalek and Candiria coming to Cleveland, I was hesitant to go. I mean, The last time I saw each of these bands (Dalek in 2007, Candiria in 2003) they were in top form. What if they were no longer fueled with the same passion and energy as they were back then. what if the new editions to the lineups gave the show a cover band feel?

I’m pleased to announce that all doubts were unfounded.

First off, I want to mention the openers, Axioma. Featuring an all star line up of great musicians and decent humans beings that you’ve seen in dozens of other bands through the years in Cleveland. The thing that stuck out the most to me is that there was at least one point in each song when I heard something really cool/unique/challenging/original. There’s no cookie-cutter or color by numbers songs with these guys.

Dalek set up quickly, despite a seemingly infinite number of chords running between turntables, samplers, and effects pedals. The first thought that ran through my head was that the sound system for Now That’s Class wasn’t 100% up to the task of Dalek’s wall of noise and feedback sound, but that being said, they got loud and atmospheric just fine.

The interplay between the three members appeared effortless, even with all they have going on at all times, which speaks to their professionalism and to the enthusiasm of the two new members, DJ rEK and Mike Manteca.

Classic tracks like, “Ever Somber” mixed seamlessly with new songs like, “Control” from this years, Asphalt For Eden. The group maintained a hypnotic intensity throughout the set before ending with a flurry of noise.

Carley Coma, vocalist for Candiria, is a beast. His onstage persona is so physically driven, I get exhausted just watching. Jumping, kicking, dancing along to the band’s off-kilter riffs and rhythms, he flawlessly screams, raps, and sings creative patterns that help this band sound like no other.

While the older material sounded as fresh as I remembered upon first hearing it, the new songs also fared well. “The Whole World Will Burn” (I’m not 100% on this title, but that’s what it sounded like he said. I wasn’t able to pick up the disc yet) started with an in your face rapid, growling verse and chugging guitars before exploding into a melodic chorus with a sing along hook you’d expect from The Deftones.

All in all it was a throw back night that promised great things still to come from two bands that I suggest you don’t miss.

I spoke with members of Dalek, but I didn’t snap any photos, so here’s one of me with them back in 2003 for you to enjoy… 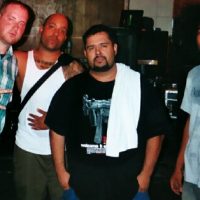 read the site it's all there!
View all posts by douglasesper →
This entry was posted in artists i like, concert/cd reviews. Bookmark the permalink.