this is an unedited version of the interview that will appear on domaincleveland.com very soon. I usually wait until dc has posted it before adding it to my blog, but this is a time sensitive issue. I hope this is enough to spur you to learn more about the situation and get involved. In the interview, Loren Naji mentions a great article posted to cleveland.com a couple of days ago. Read that, get mad, write a letter or make a call! Below the interview are a few photos I took during the first raid. The cops forced us out of the building with threats of violence and arrest. The art in the last photo is by Canton area artist Steve Ehret.

When the Loren Naji Gallery was shut down a month ago, DomainCleveland was on the scene to see the events first hand. Then, just this past weekend, when the fire marshal shut down the gallery for a second time, we knew there was more to the story. Loren Naji was kind enough to break it down for us.

Douglas: I was at your gallery for the opening that was shut down a few weeks ago. The night is still surreal when I think about how it was all handled and how rude the cops were. This past weekend, when you were shut down again, I was dumbfounded and curious as to the circumstances. How did it all play out?

Loren: Well, again, the police came in that day, looked around and I assured them we weren’t serving any alcohol. The event was to launch the new CAN Journal (Collective Arts Network), which is a great resource for the community, edited by Mike Gill, as well as a closing event for the three artists hanging on the walls. The police said everything was fine, that we wouldn’t see them the rest of the night, and then they left. The event started with no music or alcohol. About an hour into the event the fire marshal came in and said he needed to talk to me privately. He asked if I had an occupancy permit. I explained I am in the process of getting one and that I have been working with Joe Cimperman (Ward Three Councilman) who said everything was fine. The fire marshal said no that’s not true, you do not have the piece of paper that says you have an occupancy permit, so we have to shut you down. So we asked everyone to leave and closed the event.

Doug: Saturday you had another event scheduled at your gallery. Tell us about the event and the change of venue.

Loren: The event was called Drawn and Quartered. I reasonably said that if I was going to be shut down for no occupancy on Friday that I’d be shut down again on Saturday, so I suggested to everyone involved a change of venue. We held it at Great Lakes. There was beer and everything was fine, but unfortunately it wasn’t at my gallery.

Doug: So where do things stand now?

Loren: Well, I’m closed. I can’t do any events, right this minute. We have meetings coming up to discuss legalizing beer at galleries. We also have a meeting to change the use of the property. Steven Litt just wrote an excellent article (Cleveland.com) about the situation, have you read it yet?

Doug: No, but it seems every time I go on facebook, there is a bit of news, an article, a cartoon, or even the piece I saw today that said you had been flogged by nuns and branded public enemy number one. So, obviously, this is causing an uproar.

Loren: Yes, that was a good one. I’ll send you the article.

Doug: For those outside of the arts community that might not have heard about the 2 events at your gallery over the last month, tell us a bit about how it all got started. I had heard there was one man complaining about code violations on the first go round with the police. Is that true and do you feel it was a personal targeted attack?

Loren: Yes, the man you are speaking of is Henry Senyak. He is a local vigilante that likes to make sure that all ordinances are followed by everyone. He doesn’t like loud music or parties. He lives a mile away, so he’s not even in my neighborhood.

Doug: How did he even get put on your trail from so far away? Why would he care?

Loren: There used to be a bar next to me called Envy that he had taken down. It was sort of a troublesome bar. They even had a shooting there. Henry is very proud and many people like that he got it closed down. An analogy for this guy is he is a robot programmed to kill the bad guys, which he does, but he also kills the good guys in the process. He only sees in black and white. He can’t see that maybe this guy was trying to do something good in the area, all he sees is the guy didn’t have the proper permit, so we need to shut him down.

Doug: For people reading about this story that are as outraged as I am, what would you suggest they do to get involved and help out?

Loren: Letters to councilman are great, letters to the mayor, maybe even letters to the police. Let them know you support me and think maybe they could give me a break, I mean, I’m trying to do the right thing. If I have court dates, come out to the courtroom and support me.

Doug: How do you see this shaking out?

Loren: I don’t know. It depends on what kind of hoops they make me jump through. I do my gallery as a service to the city. I love art and I love artists. I think more art is what the community needs and I want to encourage that growth. That’s my real reason for doing this. I am not making money doing this. Artists go in to communities at their worst and help them grow. It’s happening over in Collinwood right now. My prediction is that in 3 or 4 years you’ll see Collinwood looking lively. It already is much safer than just 6 months ago. There’s lots to do. It looks lively. Art is my focus. I got a place in Collinwood. They gave me a grant to do it. They like my energy over there. A bus that I designed is going to be taking people to art galleries and shows. I’m just trying to create excitement in the community. If they want to shut me down for that it’s sort of like buying someone a gift and they try to punish me for it I’ll just take the gift back to the store. If they don’t want to play ball, I’ll take my ball and go home. 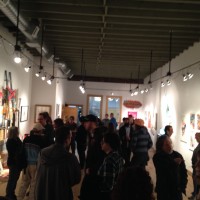 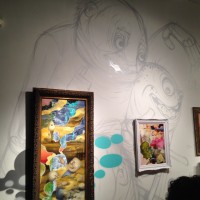