THE NOTE (in under 2000 words, which is blasphemy, of course)

For years I have done reviews for a website called domaincleveland.com. We primarily focused on music, but also I manage the occasional movie, restaurant, art show, or book review as well. Tonight, however, I want to review, “The Note”.

Understandably, some of you are confused as to what “The Note” is, well, I will (try) to explanation and do it justice. Some will read and possibly think I am being a little over the top, or some may even think I am joking, but friends, this is no laughing matter, for “The Note” is one of the most important moments in rock history. Generations from now, scholars will debate it’s long lasting effects on our society, and somehow, they will all be correct, for the note is a universal truth.

In 1976, Boston (the band) released their debut album with an opening instrumental interlude, known as, “Foreplay”. The intro features a rapid bass-line shadowed by a synthesizer and accompanied by thrashing drums that come in and out to intensify the already epic sounds. Heavily effected guitars provide a spacey break-down until the sounds washes completely away, leaving room for one of the best party-rock anthems of the century (and yes, that might be an understatement)

“Longtime” is the second track on the album, though oftentimes it is coupled with “foreplay” as one massive track, known collectively as “foreplay/longtime.” I could spend the next thirty years dissecting this track, but we are here for one express purpose, and now that I have narrowed down which notes I could be talking about, I am guessing some of you know where this is headed. For those that don’t I suggest you start downloading this/these songs post-haste.

Longtime begins with 2 crisp smacks on the snare drum and a whaling guitar, and just like that, the song has you hooked into a euphoric state of mind. By the time Brad Delp’s vocals kick in, the groove has been established and the mood heightened beyond what most human ears can tolerate. The groovy keys keep the rhythm, but they also add a layer of melody as the band build toward the first bridge. Where will the band take the song from here? Maybe, a huge hook-driven chorus or they could simply speed up the tempo into a fast-fuel dragster of a rock song? No, how about hand-claps and a break down.

That’s right, because if they did play right into the chorus, you’re face would probably melt. Don’t believe me? Fine, edit out the breakdown on your computer and see what happens. Just make sure to have all of your affairs in order.

An acoustic guitar drives the beat along with the claps as the vocals return to carry the melody. You bob your head and tap your feet, but mister; I don’t suggest you let go of the wheel, just yet, because the drums are about to kick this rocket into outerspace overdrive…or so we thought.

Delp’s spacey vocals cut around the dense sandstorm of snare and tom hits, while the guitar and synths unexpectedly slow their groove and ease into a rapid, note-y, and all-too-quick, guitar solo.

The second verse is on us with no warning, leaving our head spinning just trying to keep up. So far the changes have been mammoth, yet unpredictable, and though the party is jumping, the beer is flowing, and our bellbottoms are getting looser by the moment, subconsciously, deep-deep-down where only our darkest secrets dwell, our mind knows something is missing. Folks, that thing, that beautiful, mysterious, foreboding, seductive, elusive thing, is, The Note, and I will let you in on a secret…even the band understood that this moment would send ripples cascading into ripples so forcibly, it would alter the universe as we know it.

For the record, as the second verse hits, we are already over 4 minutes into this aural assault, and there are still 3 and a half more to go, of course, after “The Note”, everything else will be a blur…if, that is, we can withstand the notes awesomeness.

My hope in this piece is to convey my love of “The Note”, so again, I must insist you erase that smirk or scowl as we delve into the meat of this article. Free your mind, forget all you know, and just…absorb.

With a final high note sung in a soft, eerie falsetto, the second verse transitions into the second hand-clap-laden breakdown, but this time, all things will be revealed.

Sing the guitar part with me, like you’ve done at bars a million times before, holding a beer up to the rock Gods with one hand, while the other is firmly wrapped around the person next to you, hugging tight in anticipation: DEE-DEE-CHUGGA-CHUGGA-DEE-DEE-CHUGGA CHUGGA-DEE-DEE–DEE (repeat)

Suddenly, every problem you have is gone. Where just moments before, the weight of the world was pushing down on your shoulders, the bills, the government, the family, the leaky faucet, the transmission on your shit-box, the boss nipping at your heels about not finishing his work the way he wanted it done, and those gosh-darn awful Cleveland Browns, who can’t even get out of their own way, all of that seems to be beneath you. And it is, because, you sir, are now standing on top of the bar, still holding up your drink, while your buddy clutches you and sings:

Looking out around the crummy dark, seedy bar, you understand that your life was meant for more, and that all those problems are not only fading away, but falling away, and you are rising, rising far up into the night sky. Below you, the Rock N Roll Hall of Fame’s windows are shattering. The jukebox is playing at eleven, but you’d swear they can hear the sweet echoes of Boston clear across in Callcutta, and they are memorized, just like you.

Delp croons with some background vocals adding to the power. The claps move us forward, unforgiving.

Your hair blows in the wind and the mist of the clouds feel good in your beard, and you forget that when you woke up that dreary October morning, you were bald, sporting a lame comb-over, and had to keep a clean-shaven face for work.

You feel a tug at your ankle. The music is spiriting you away, but something is holding you back. It’s a chain thick enough to withstand a ton of the United States military grade explosives, and even if the bloodsucking vampires in Washington offered, you’d tell them to take their help and shove it. Besides, you know, as Dwid says, the chain is only as strong as it’s weakest link, and you my friend, have an ace in the hole.

Sib Hashian is playing drums on this track and he must be playing with sticks formed from wood grown and burnt in hell, because the sweat on your brown is starting to boil.

And as the second break down comes to a close, his monster fill crashes so loud, like the Dead Sea (or red sea?) after Moses ended his part, the vibrations of the soundwave lash at the chain holding you down, and the weakest link shatters into a million pieces, this folks, is about to get surreal. Look up any religion on earth and they all speak of moments like this in their own way, but none of them have a sermon or scripture that explains it like Boston.

You flap your wings, bursting from our atmosphere, hearing the band abruptly come together for two quick foundation laying notes, and then, as you shoot into the outer-limits, the note is unleashed.

If you told me that the guitarist who played this note spontaneously combusted, just like Brandon Boyd of Incubus always feared, I would have told you I could believe nothing less. And you know what, I bet the guitarist didn’t mind one bit, because his soul knew, nothing could ever be as good at The Note.

It is soulful, it is pure, it, and by proximity, now you, are THE phoenix rising from the ashes to transform into the most beautiful creature known to man.

Of course, there is no need to mention the flames spouting from your feet, because you are the flame and it is everywhere, all around you, all at once, and it…feels…good.

You thrust your fist forward, as you hurdle through space, just in time to punch a hole in our measly third dimension. Sure, as the guitars scream into their face-paced solo, you want to slow-down enough to take a look at what lies beyond, but before it becomes understandable to you, you crash through into another dimension, and then another. The notes pulse and pound, as you slice threw a million dimensions at once.

Though you can’t imagine anything ever feeling better, you also understand that once “The Note” has been played, everything after is post-amble, which, when you think about it feels, smells, and appears very similar to the preamble, or as Boston would call it, the “Foreplay”.

You hurdle back now, recognizing Pluto, and the other planets, and as Brad Delp’s vocals return with, “It’s been such a longtime, I think I should be going.” You round the moon, and head for home.

Unsure how to land, you close your eyes, and point your feet toward the ground. You can see Lake Erie, Terminal Tower, and there it is, the bar.

The band devolves into a repetitive groove, singing about taking their time, and then, as everything fades away, you open your eyes.

There you are, standing on top of the bar, with a beer still raised to the rock Gods. Your buddy is up there with you, but he is staring at you in disbelief. He knows you are not the same man you were, a mere 7 minutes and 44 seconds ago. Without another moment of stalling, the bartender tosses you a shot of the good stuff he only likes to bring out after closing time.

You sweep the bar, shot in hand, and your gaze falls upon the most beautiful woman you’ve ever seen, and holy shit, she is undressing you with her eyes. Deep inside those luminescent emeralds, you can see the same flame that’s burning inside you.

She smiles and approaches the bar, grabbing your hand and begging to fly with you.

You wonder if it can ever, EVER be as good, as a familiar sound reaches your ear: it is the pitter-patter organ intro to “foreplay” and you cannot believe it.

Her jaw drops and the sound is so pure, it’s as if the notes are real as the bad tattoos and smell of over-fried-potato skins.

To your left, your buddy speaks as if hypnotized and says, “No way, man. I must’ve played it twice.”

You pull her above the bar, and whisper, “Hold on tight.”

She nuzzles against your chest, and you feel her wrap around your larger than average waistline, but who cares about appearances, when you, my faithful readers, have another date with rock’s greatest Note? 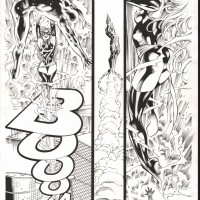 artwork by Mike Deodato Jr.. it appeared in marvel comics new avengers issue 17. this is page 20, and as you can see, ms. marvel is flying over the rock hall here in Cleveland, Ohio. I do not claim any rights to this image, but I also will leave it up until someone tells me not to post it, because it fits too well with the story not to, ok?