It was one of those days, you know, that drag on and get worse by the minute. I was behind at work, stressed at home, and the only thing positive about my writing was that I hadn’t had the opportunity to screw it up yet.

I found myself at a hospital in Westlake, Ohio sweating out the previous nights cheap scotch, wondering just how bad the Browns were going to be, and unsure if I had applied any deodorant that morning.

With a quick sniff affirming my fears, I grimaced, and walked back toward the third floor stairwell so I could grab some DME from my truck. (For those that don;t know my glamorous day job involves delivering DURABLE MEDICAL EQUIPMENT)

In my experience, I have learned that life usually sends the cool moments when they are completely unexpected, and though I realize my version of cool does not match with the masses, I still think many of you will appreciate this.

Opening the door to the stairs I noticed a man walking down the steps just a few paces ahead of me. My mind started racing as I took in the man and I wondered if I had finally broken through the barrier into the movies that I keep expecting to shatter.

Already, I wished I was this man. Happy, go-lucky guy without a care in the world, but it got better from there.

Upon his back, the man carried a large circular object like a jet pack straight from the Rocketeer or Boba Fett’s closet. I looked behind me to assure myself I wasn’t on some hidden camera television show being pranked by my wife as true realization grabbed hold.

I didn’t need confirmation to know who this man was. I had seen this backpack system and uniform before. This man was a ghostbuster!

The unmowed lawn was forgotten, the rejected query letters lost their power, and what leaking sink could you be talking about? My life is great, no worries. Dude, do you realize how awesome the ghostbusters are? Have you ever thought about meeting one-let alone maybe being one, one day? Of course you have. Don’t bother to deny it.

Frozen with excitement, I used every ounce of patience I had to hold myself back from doing anything rash. I was three steps behind the man trying to decide if I should quote the movie or sing the theme song, or simply ask him what Egon was really like in person.

We rounded the last flight of stairs before we would reach the ground floor and I knew my window of opportunity was shrinking.

I know what you’re thinking and yes I realized that he couldn’t just come out and tell me he was a ghostbuster because then everyone would want his autograph and a picture with their crappy cellphones and in the meantime whatever ghost he was chasing would get away scott-free. Yes, I get it. But we are talking about a real life ghostbuster.

In a surprising and rare moment of my life I decided I had to respect what the man was doing and help him keep his cover. If he wanted to pretend the pack on his back was a vacuum, so be it. As long as I knew the score.

We descended the stairs in silence never making eye contact, in fact, I am not even sure the man knew I was there. Until…

The man pushed the door part way open and stopped. He glanced back at me as I stepped off the last stair and onto the ground. Closing the door, he smiled, nodded, and said, “Who you gonna call?”

I raised my hands in the air in excitement and exclaimed, “Yes!” Then I continued, “I knew who you were and I wanted to say something, but I didn’t want to upset you. You just made my day, week, and month.”

His smile widened and he nodded again, all business. As I lowered my hands and attempted to regain my composure the man reopened the door and exited the stairwell leaving me alone once again.

I had so many questions, but, in the end, I knew all I needed to know. They are out there.

Thank you Ghostbusters, thank you. 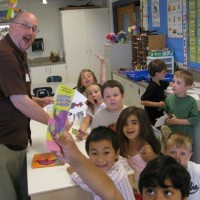