My father was born on October 2nd 195…185…175…well you get the idea. The doctor was somewhat surprised to see the baby he was delivering was wearing a fully tailored suit. He was also surprised that the babies shoulders were not the hardest part to deliver. You see, in one of the babies hands was a briefcase, and in the other my young father held a business card.

The card itself had a very simple design, something anyone with a second grade education could put together. Bright peppermint-white card stock with crisp chocolate brown lettering declared the newborn a charter member of the WA (workaholics anonymous). While there was no phone number listed the address clearly declared an office in the Cleveland, Ohio area which would make it easy for anyone wishing to celebrate hard work easy to find.

As a young kid myself, growing up around my father was an interesting adventure. He is a funny guy, though most of his jokes are followed with Wocka! Wocka! Wocka! and a few groans. But he is also a very serious guy and as stated he likes to work a lot. While I inherited a knack for jokes so cheesy Wisconsin residents would wear them as hats I somehow didn’t absorb the love of all things requiring a tie and shined shoes.

No, I grew up gravitating towards the surreal, fantastical, magical, and just beyond the realm of our known reality. That is to say I can never get enough Star Wars, Buck Rodgers, Battlestar Galactica, Star Trek, Lord Of The Rings, and anything else that stretches and challenges the imagination. I didn’t know my father as a young kid, but I usually picture him studying the latest stock numbers in the Cleveland Press newspaper each morning while eating a regimented breakfast and then heading off to elementary school.

There was a day my father took me to his office in downtown Buffalo, New York to spend some time with him and see what he does all day…and night. Within minutes I had grabbed a marker and started doodling a story on a large paper tablet he had set up in the office. To this day I still really don’t know what my dad does at work, but I know he needs large tablets of paper for some of it.

The story I worked on was called, “The Magic River” and it followed a boy and his friend from their home and on an adventure to find a river…it was magic. Over the years I have rewritten and updated the story time and again and one day I plan on finishing a final novel length version. (and maybe a picture book version of there is an artist reading this that wants to collaborate with me) As much as I enjoy writing everything I write there is something about that story that I am always drawn to, and I think if I do finish it that it will be one of my favorites.

But I didn’t bring us all together to advertise an unwritten book. I brought us together under the title Science Non-Fiction, right? Just so. I wanted to give a little background before embarking on a story that will eventually lead some of you to question my character and perhaps my sanity. A blogger much more successful than I told me that to have a blog worth reading I would have to bare some of my soul and truly let people inside my head. My initial reaction was obvious…I would embarrass myself! So what follows is a true story that I swear by, and will defend till the day I die.

There are small intersections around the universe where a young imaginative boy and his businessman father can meet and each feel comfortable. For my brother Craig, my father and me one of those places was a Business attire store in Eastern Hills Mall Clarence, New York. Previous to the major renovations to the mall in 1986 we as a family took several trips to the mall, and that certain store which brought all of reality down around me and put everything I thought I knew into doubt.

The store was located on the corner to of two convening branches of the mall thus there were two entrances into the store. One was off of a main branch while the other, if I remember correct, lead to a shorter hallway and an exit from the mall. It was from one of these exits that life and my sci-fi nerd brain started to mix.

As I explained earlier I have no interest in suits, ties, leather organizers, two-hundred dollar shoes, gold and diamond encrusted belt buckles, or monogram labeled cuff links. I am interested in flying in space, traveling through time, discovering alien life forms, and generally saving the galaxy. My brother is the same way, though he hides it better than I do. Back then though…oh boy… I’ll bet he can still recite the original Clash Of The Titans line for line. (He won’t, but he can)

So there we were standing in the midst of grown up stuff and wanting nothing more than to see a Klingon Bird Of Prey in our sights, and then, I felt it. It was a tug, a pull, like a strong gust of wind or better yet a vacuum was pulling me towards one of the exits. I turned only partially aware of my brother doing the same at my side. Eyes wide I looked out of the exit of the store and I knew right then something amazing was happening. I took a step. Stopped. Then following my older brother I took a few more steps and came within a few feet of the exit. It was shaped with an arch topping the exit, and the floor changed abruptly right outside the arch. We peered outside and what we saw could not have been there.

Across the hallway was a stone building next to an old western style saloon type structure. Through the archway we were peering back in time, and we knew deep inside that if we crossed the the line between hallway and store we would travel there ourselves. Did this doorway lead to only this one alternate time or could we choose where and when we went? There was no Jedi or wizard available to answer these questions.

Feeling the pull I took a step, but my brother held me back. Our eyes met in excited anticipation as disbelief melted away. One moment I learned that all those stories I read, and movies I watched could be possible. That they were true after all. Looking back into the store we watched for signs that the grown-ups shopping also observed what we did, but it was obvious on their stern faces we alone knew the true power of what stood here in the mall. It was a nexus, a vortex of time and space and we were on the brink of it all.

I remember thinking how foolish I was to make my first story about magical travel in a river when in reality there are magic doors everywhere and maybe anywhere. Is it all a matter of opening yourself up to them? Did my brother and me do something to awaken this wormhole ourselves?

Together, not holding hands but together, we stepped through the archway and into…

Well, we were still in the mall. We could see the steak restaurant across the way with it’s faux stone exterior mimicking a cave or maybe a house from the Flintstones. Next to it was a place in the vein of Roy Rodgers(not Buck) with it’s dark-wood paneling, barn-like appearance welcoming families to eat hearty. Gone were the horses, the cowboy’s, and the tumbleweed. Instead it was just guys…guys trying to walk around us kids to buy suits.

We turned, walked back into the store, and sought out our father to see if he was ready. Disappointed, that we had not traveled in time mostly but also that our father was still shopping, we waited until it was time to go.

My father took his ties to the checkout counter and made small talk with the employee with some tips on cleaning and maintaining a certain fabric of suit jacket and also about the helpless feeling of being a Bills fan. We followed him out of the store using the “other” exit, and that was when I happened to look back through the store.

He stood about six foot six, and wore a large cowboy hat over his scraggly weather-worn face and authentic Sam Elliot mustache. On the right breast of his leather vest I saw a bright golden badge in the shape of a star. The man winked and nodded his cap as I turned the corner and out of sight.

Go ahead and laugh if you need, shake your head if you must, or even walk away from your computer disgusted, but don’t ever ask me to believe there isn’t a possibility of time travel and alternate universes and things more amazing than even I can imagine.

I just hope the next time I feel that pull I don’t shy away and walk away just when it gets interesting. And I hope you don’t either. 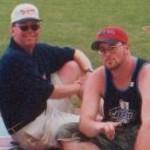