that time i recorded with one of my idols

i’ve known chuck mosley for 15 years and over the last ten we have spent a lot of time on the phone, on the road, and damn have we texted a lot, but besides an old band of mine opening for him and a near collaboration for a compilation cd we had never made any music together.

indoria, a project …(hang on chuck just called…ok, 35 minutes later, just heard 2 new demos for songs and tried to tell chuck how i would “produce them” and he told me why he wouldn’t do it that way) i helped start back in 1998, had been dormant for a year as michele and i adjusted to life with 2 kids, but we had 8-12 demoes floating around between us. Adam and i reached out to each other and said lets see what we have. starting in late 2013 we listened to various tracks and cherry picked a few to retry, a few to rework, and discussed some cover ideas. by spring of 2014 we had 8 tracks picked out and added 5 songs from previous releases we thought we could possibly rerecord and give a better life to. one of those songs was my favorite tune off our first disc, but when my ideas got a little grandiose, we put it on hold for a possible future release.

as usual, we asked the world of michele and gave her little warning as to our recording plans…no matter. in june of 2014, she came, she sang, she conquered. all in a few quick sessions.

One song, what i feel, felt incomplete to me. there was a breakdown part that i had wanted to a lead guitar/key/something lead to really keep the energy from the rest of the song. i gathered a list of guest musicians that we knew who might be cool to work with. at the top of my list i had the two guitarists from vua, chuck and tim. i thought i’d love to hear chucks noisy guitar swirling around tim’s clean powerful tone again and since vua weren’t very active, they might be game.

i played the song over and over in my car and tried to “sing” some possible guitar lines to give them some direction/idea was i was thinking about. my only fear is that some files i recorded that day will leak out into the public someday 🙂 while doing this, a melodic pattern started to emerge and i realized lyrics were forming more and more, each time i did it and by the end, i didn’t picture a guitar lead there anymore…just a third verse that was very different than the rest of the song.

i got adam to flip on the mic at his studio and tried messing around with the pattern and both of us seemed to think it might work. the part was more of a spoken thing than a melodic part, so i thought i had found my part on the song that up until then had been sung by michele solo. i came back that weekend and did about 5 different takes, and i really liked one of them. i was surprised, proud and excited.

in july of 2014, adam helped chuck record vocals for a special demo for a label (that is a post for another time) and i was able to sneak in some background gang style vocals. that night, we played a few songs from the new indoria for chuck. i noticed he was singing along with michele on one of the songs and we asked if he’d want to get in the vocal booth and ramble along to the song to see if anything seemed to fit. 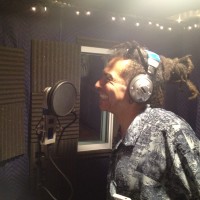 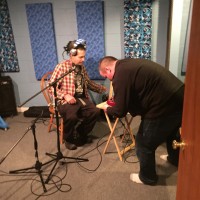 he took a dozen passes through the song, which he hadn’t ever heard before, and he already had a good grasp on what we were going for. i thought he sounded awesome singing with my wife…like awesome awesome. so i wrote some of the lyrics out for him and also wrote the lyrics out to the third verse i had recorded. he sang that part along with my vocals and i’ll be honest, i got chills. i love this guys voice! hearing us singing together was very cool and for about 12 hours i was on cloud nine…then, i realized, i needed to cut my part out and add michele. she recorded the next weekend and managed in just 3-4 takes to match chucks unique delivery in a way i never could (listen too the way he sing’s “there’s” during the line”there’s a secret i need you to know” and how he holds it out and raises…) 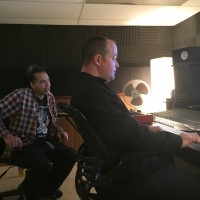 later in july, adam rerecorded his bass part to reflect the new vocal pattern and we brought in jon vinson an awesome drummer to give the song some teeth. in the end we released 7 songs in december 2014 under the album title, there’s a gleam. 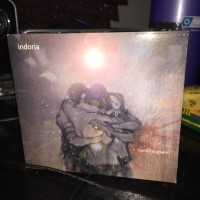 one of the songs is called home now and is a revamped version of a song called southbound (which i wrote on the night lebron made his south beach decision) home now was written on the day lebron announced he was coming home. the song doesn’t fit the vibe of the album, but it was a moment in time that needed to be shared.

just before the album came out, chuck let us know he had hit hard times and needed help. we decided to release the album digitally two weeks early and donate a portion of each sale to his family., we also added the track to his site and he gets 100% of that.

i am never going to be a rockstar, but i am happy with a lot of the music i have been a part of, and this track and album have been the most rewarding yet, which reenergizes me to get working on the next indoria (work is already in progress) not everyone can say they worked with one of their favorite sings and even fewer can say they wrote a duet for their wife to sing with that singer 🙂 i’m glad that when my kids hit their teen years and dad is the lamest, nerdiest dad on the planet, i have this track to play for them to let them know, once, for a brief time…dad was cool.

here is the song “what i feel” featuring chuck mosley free to listen to:

you can also donate to chuck by purchasing the song at:

or buying/downloading the full album at: 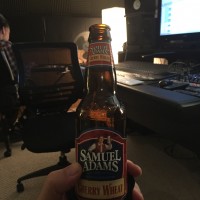 read the site it's all there!
View all posts by douglasesper →
This entry was posted in artists i like, my writing, songs i'm involved with. Bookmark the permalink.