here is my entry into a recent 24 hour short story contest. the rules were that you had a strict word count(900), strict 24 hour window to write, edit and submit, and you had to follow a prompt which was:

Growing up on a fishing boat docked in this small northwest
coastal town brought stares from townspeople and jeers from
classmates. She desperately wanted to escape but, with
competitors driving down charter prices, she knew her dad
would never be able to afford a replacement. As she sliced
open the belly of yet another Salmon, her eyes widened and
she dropped her knife…

I tried to come up with something a little different, but as I didn’t even get an honorable mention, I guess my story fell flat. I enjoyed it though and wanted to share. It hasn’t been edited or altered since it was submitted, so there are mistakes I’m sure. Feedback is always appreciated!

Aboard the fishing boat, Masu lowered her head in shame as a few of her schoolmates passed by. They leered, jeered, and let loose a vitriolic dose of peer scorn. She understood why they taunted her, but Masu had no choice.

Her schoolmates were fishing for a reaction, words were all they had left to hurt her with, but there was no way Masu would take the bait. She had too much work to do.

The old wooden ship, around which Masu had lived her entire life, was rotting away after years of navigating the harsh salt waters of the Pacific. Now though, it was docked, as Masu and her father, Coho, prepared for another hectic workday, exactly the same as the last.

Every day as the tide rose, large crowds gathered around the rusty fishing boats shopping for salmon, and by the time the tide rolled out again, Masu’s dreams of escape sank with it. The young teen wanted to be as far from this dying fishing village as she could get, but Masu knew her father couldn’t survive alone.

Performing her first duty of the day, Masu counted the eggs the mother salmon had laid through the night, and updated the ancient master ledger. This part of her day was pleasant, even if the birthing area reminded Masu of her lost mother.

She drifted to her work station, grabbed her knife, and felt another little piece of her soul cut away.

From the next station over, her father asked, “Are you feeling ok, dear? You look a little pink in the cheeks.”

She met his gaze, tears welling in her large eyes, her mother’s eyes, but managed to smile.

“I’m fine, daddy. I feel…,” she trailed off, but regained her courage enough to explain, “The egg count is up, but I still feel guilty.”

Masu’s father jutted his hook-shaped jaw, but wisely followed the easiest current, which led him back to his work station to finish his prep. They didn’t have time to chatter. The owner of the dock would be checking in on their progress any minute.

Father and daughter waited in silence for the volunteers to set up the lines of fish.

A volunteer, nicknamed Steelhead, said, “Coho, I hate to be the bearer of bad current news, but today’s boats have the lightest nets I’ve ever seen.”

The whole crew knew that meant rapid tidings were awaiting them downstream. The summer had been the leanest in recent memory, and it was getting worse, the deeper into July they got.

Masu looked at the orange knife in her hand and was horrified at her word choice.

Coho motioned to Steelhead and said, “All right, bring them in, one at a time. You know the drill.”

Grabbing the first salmon of the day, Masu dug the knife into its gills and pulled the sharp blade toward the fish’s caudal fin before it had a chance to protest. This was her day. Grab, gut, and pass.

Within minutes, she had scales, gills, and various bodily fluids covering her. Work provided towels, but Masu thought, ‘why wipe when the salmon line would be swimming for several more hours?’

The organs spilling out of each fish were horrible to behold, but Masu had learned to deal with them. The sounds and smells made by the dying salmon, however, made her sick, every single slice.

She fell into a routine, a day just like any other with no change in site. The tide rolled in, she gutted fish, and sunset couldn’t come soon enough. That was, until she sliced open the belly of the next salmon. Her eyes widened and she dropped her knife as a large bellow echoed around the ship.

Masu looked up from her workstation just in time to see two men approaching. The man, who had just bellowed, was Chinook, the greedy owner of the dock, and hobbling along with him was his first mate, sporting a shaggy, silver beard and a scowl.

A fin smacked her face. Horrified, Masu realized she hadn’t cut the fish in her grasp deep enough to kill it. It struggled for escape as Masu embedded her knife in the fish’s gut and twisted until the job was finished.

Above her, Chinook spoke to his bearded, sock-eyed partner in a language Masu didn’t understand, “So you see what I told you was true, chum. Now, how about we renegotiate my price, let’s say, a 90/10 split.”

The bearded man was dumbfounded. He wiped sweat from his brow as if it were his disbelief.

“Chinook,” the scowling man said, “I don’t know how you did it. Bio-engineering salmon with functional hands is one thing, but, I mean, fish killing other fish, is inconceivable.”

Beaming with pride Chinook admitted, “It wasn’t easy to convince the salmon school’s head chief to do it, but when I sliced up his wife and agreed to spare his daughter, he changed his tuna. The boats have been half-empty all year, though, so I’ll probably take his daughter after all. I can always have him train another fish next spring.”

Across the ship, waiting in line, her schoolmates leered and jeered. Masu understood why they taunted her, but she had no choice. 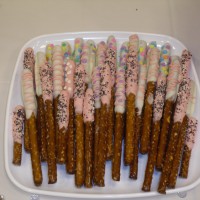